Would you like to know more about my work?

Visit me at the country fairs new exhibition!

You can come and see my newest works right now. I look forward to seeing you!

Welcome to my new website,this one I'm editing my self, so will have new works on as thay are completed. 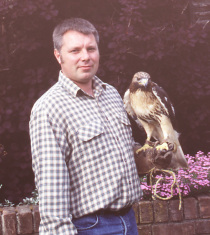 Martyn was born in 1964 in West Bridgeford Nottingham. He still lives in Nottingham with his wife Jane and Sam and Ellie his two children.

Since his childhood he has always been interested in natural history, spending many hours in the fields adjacent to his home, Martyn also loved drawing so it was inevitable that before long both would come together.

Many people ask when and how Martyn first started painting. Having no formal training, Martyn started out as a child copying illustrations out of books like the AA book of birds. He did not attempt any serious painting until he was in his early twenty's when he purchased his first home with Jane and needed to fill his own wall space.